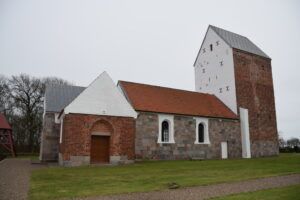 The church was built in the 12th century and expanded with a tower in the 15th century. Almost hidden by a dense vegetation that seems surprising in the otherwise rather meager dune parish, is Skallerup Church, which consists of a Romanesque choir and nave, west tower, sacristy and porch from the late Gothic period. The Romanesque building, choir and nave, is built of granite blocks on a sloping plinth. The north door is walled in, while the south door, somewhat widened, is still in use. From the original windows, two round-arched monolith rafters have been inserted into the south wall of the chancel.

Vennebjerg Church is one of Vestvendsyssel’s distinctive churches, which with its high location and unobstructed view is a fixed point in the landscape visible knowledge of.

The church was built in the middle of the 12th century and has a Romanesque nave and chancel built of granite blocks. The tower, sacristy and porch are later extensions – probably from the 15th century. It is dedicated to Skt. Andreas.

Finds of flint tools show that Vennebjerg hill island has been inhabited by people all the way back to the Stone Age. 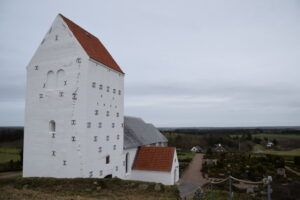