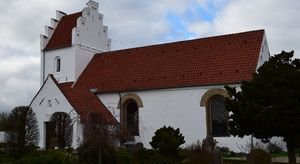 Alslev Church is a small whitewashed church built in the period 1200-1250 as a castle chapel for Alslevgård. Of this church, the sidewalls and the south door still remain. From the cemetery, you can see to the west the remains of the moat from Alslevgård. The present church was built in the years 1400-1550. 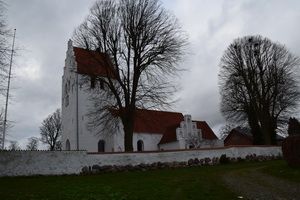 Around 1500 it was provided with a porch, chapel, and sacristy. The baptismal font is a Romanesque granite font. 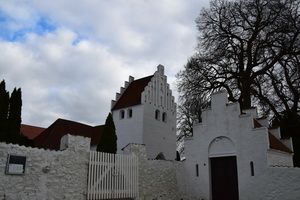 Tureby Church is a cruciform church of quite significant dimensions but was originally more modest. The church was built in the early 12th century and was a typically smaller village church, but in 1720 two large aisles were added. The reason for this large expansion was that at Turebyholm Estate an equestrian barracks was set up and all the hussars had to go to church every Sunday. The upper thrones are with noble arms for the Moltke family. The church is located west of the manor Turebyholm and in close contact with the breeding buildings. The church tower is visible on a large part of the manor’s built-up area and the church is experienced as part of the entire building complex.

It consists of a Romanesque apse, chancel, and nave with late Gothic additions, tower and sacristy, and a couple of large chancel arm chapels from 1721-22.

Øster Egede Church is located in the immediate vicinity of the manor Jomfruens Egede. When the associated village was burned by the Swedes during the Swedish Wars in 1658, the village’s lands and the church came under Jomfruens Egede until 1994.

Vennebjerg Church is one of Vestvendsyssel’s distinctive churches, which with its high location and unobstructed view is a fixed point in the landscape visible knowledge of.

The church was built in the middle of the 12th century and has a Romanesque nave and chancel built of granite blocks. The tower, sacristy and porch are later extensions – probably from the 15th century. It is dedicated to Skt. Andreas.

Finds of flint tools show that Vennebjerg hill island has been inhabited by people all the way back to the Stone Age.

Sankt Catharinae Kirke is a cruciform church (dedicated to Sankt Catharina of Alexandria) and it is Hjørring’s largest church, located near the town’s old square. It consists of a late Romanesque core of brick but is dominated by later alterations and additions. In late Gothic times, probably the first half of the 15th century, the original chancel was replaced by a three-sided finished chancel with a “broken” gable, but the chancel arch seems to have been preserved until approx. 1650. At the north side of the choir, a sacristy was erected. Further, the entire church was given a vault. Shortly after the middle of the 15th century, a chapel with an 8-part vault, Sankt Annæ chapel, was built on the south side of the nave, which according to a now disappeared tombstone was founded by the priest Peder Pedersen, who died in 1489.

The church choir is made of granite blocks, while the nave is mainly of red monk stones. The porch is from the middle of the 19th century, however, a walled block stone with ornamentation, placed above the door, probably originates from the church’s original south door.

Traces of frescoes have been found in several places in the church, but only on the north wall of the nave is a fresco preserved. It originates from approx. 1350 and was uncovered in 1875. The motif is Saint Christoffer, who carries the baby Jesus across the river.

The baptismal font is Romanesque and was donated to the church in 1907. The altarpiece and pulpit date from 1612 and 1602, respectively, and are both Renaissance works by master carpenter Niels Ibsen.

Mårup Church was a church in Mårup Parish in Hjørring Municipality. The church was located on Lønstrup Klint, an approx. 15 km long coastal slope between Lønstrup and Løkken. It was built in the 13th century.

On March 24, 2008, the church was used for the last time for worship in connection with the worship service on the 2nd of Easter

Mårup Church was used in 1987 as a location during the filming of Gabriel Axel’s Oscar-winning film Babette’s Guest, based on Karen Blixen’s story of the same name.

The ship anchor in front of the church comes from the English frigate “The Crescent”, which on its way to Gothenburg with supplies for the English fleet sank off Maarup on December 6, 1808. At the shipwreck, 226 crew members died, and they were all buried in a common grave in the cemetery. Seven officers and 55 sailors survived.

In addition to “The Crescent”, two other English ships – “St. George” and “Defense” – sank further down the west coast some years later. The English Ministry of the Navy, therefore, erected a memorial plaque in Maarup Church in 1895 over the three sunken ships.

When Lønstrup Church had been built in 1928, Mårup Church ceased to be used as a parish church. It was then maintained as a protected monument by the Danish Nature Agency. The sea, however, ate into the cliff and gradually came closer to the church, which created fear that the church would plunge into the sea from the 70-meter high cliff.

After several years of discussions about the fate of the church [1] [2] and attempts to secure the church [3], the church’s owner, the Danish Nature Agency, decided on 27 November 2007 a gradual dismantling of the church. In 2008, the church’s lead roof and the top of the walls were removed. Over the next few years, until September 18, 2015, when the last stone from the church’s foundation was taken down, the church was carefully taken down under the expert guidance of experts from the National Museum.

During the first years of the dismantling, all material from the church was stored and stored in a warehouse in Hjørring, with a view to donating the material to a possible reconstruction at a safe location if local benefactors would fund such a project.

In the fall of 2015, a children’s grave was found under the altar after the church had been completely removed. Archaeologists considered the find intriguing, as it is not uncommon to find children buried under the altar. It has probably been a child of a rich family.