Menu
Call us
Email us

There is a great number of Danish genealogy sources. Some of them are online but even more are available at the Danish archives.  Rigsarkivet [The National Archive] in the center of Copenhagen has the greatest collection of sources available to the public. Fortunately, My Danish Roots is located near the archive.

Nonetheless, the church books and the censuses form the starting point of most genealogy research as these sources hold a lot of information about the individuals.

The content of these records changed significantly over time. A record of more recent date generally has more details than older ones.

Below you will find samples of the different source records we use in our genealogy research.

We substantiate all our findings with similar copies of the source records. They will, of course, come in higher resolution and be readable. 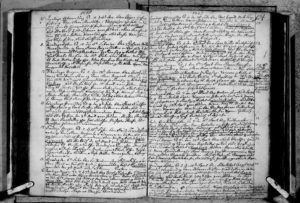 The christening record below is from Odense 1805 and badly arranged. The key take aways from it are: 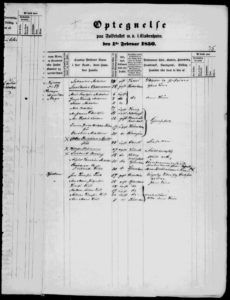 The contents of the cenuses vary significantly from one census to the next.

Censuses were also conducted in Schleswig, Holstein, Lauenburg, Greenland, The Faroe Islands, The Virgin Islands, Trankebar and Frederiksnagor but not that often and in other years than the ones above.

The census record for Copenhagen 1850 holds this information about the person of the birth record:

Besides the innkeeper’s family and servant, there were other tenants, i.e. a principal, a student in arts, a journeyman grocer who was in the navy at the time of the census and a navy lieutenant 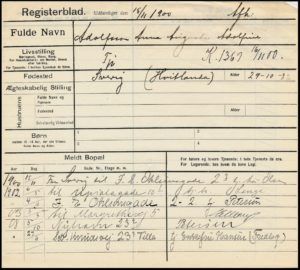 Copenhagen Police kept census records of all citizens 14 years or older during the period 1890-1923. Children were registered together with their father.

Record of the Copenhagen Police census

The record above is for Anna Augusta Adolfine Adolfsen and says: 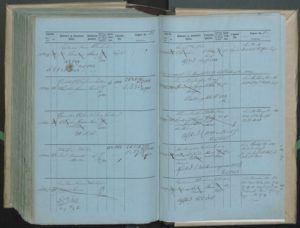 The entries are registered per recruiting area which since 1788 usually is the same as the parishes.

The levy rolls have information about:

because the notes are all hard-to-read abbreviations they are usually difficult to dechipher.

When a man is no longer fit for military service (for instance due to his age), his name is crossed out.

The death record has the following information about the deceased: 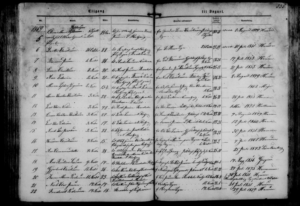 The List of Accession and Expunctions is a section of the church book. In principle, the lists should include information on all persons who have moved to or from the parish; but there is some difference in how the priests registered the information. Thus, in many cases, only servants are on the list, while farmers and other self-employed people are not listed. Similarly, in some parishes, only the head of the household is registered, while the wife and/or children are missing. In other parishes, all people were listed.

It also differs from parish to parish when the lists began. This usually happened between 1814 and 1830. In contrast, all lists in the cities ceased in 1854 and in the parishes in 1873.